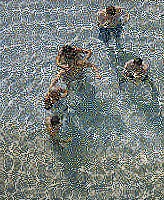 William Betts uses digital technology and industrial processes to produce paintings that are both visually captivating and technically innovative, reflecting on the possibilities for an analog medium in a digital age. His paintings investigate the connection between the structural nature of video and digital photography as an organized collection of color and location data that manifest as an image.

Quoting from Claudia Schmuckli's text from a 2008 Blaffer Gallery catalog: "Unlike other artists of his generation who have incorporated painting machines into their work to signal their critical or ironic engagement with the history of the medium and the role of the artist, Betts embraces the machine as the only tool that will produce the aesthetic and quantitative results he is after."

William Betts was born in New York City. The artist currently lives and works in Miami, FL. Paintings by William Betts have exhibited widely throughout the United States, Canada and Europe. In 2013, the artist was selected by 1800 Tequila for their Essential Artists series. Betts placed Best in Show in the 2006 Biennial Southwest at the Albuquerque Museum and was a finalist for the 2007 Hunting Art Prize. Reviews of his works have appeared in the Chicago Tribune, Time Out Chicago, The Boston Globe, Houston Chronicle, Artsjournal.com, and the Dallas Art Revue.

Lives in and works in Miami, FL